I've got a little confession to make. I've been keeping something from you. It's nothing terrible, and I had my reasons (which I'll explain), but it's now time to 'fess up...

Drum roll, please.............................................
On Christmas Eve, I got engaged!
Yup. I told ya'all about the emerald ring, and the yarn that coordinates perfectly. Well, what I didn't tell you is that when Jim bought me that emerald ring, he also put a deposit on an engagement ring. And when he gave me the emerald on Christmas Eve (which by itself surprised me), he also told me that there was another ring for me! I was totally stunned--not that he wanted to marry me, because we had talked about it and we knew that's where we were headed. (We've been together for, like, seven years now.) I was stunned because I wasn't expecting to become officially engaged anytime soon, and I had no idea that he had apparently been planning this for months now.

And you want to hear something really sweet? He brought his son with him to help him pick out the ring!!!

OK, and now my reasons for not blogging about this. (The reasons are cumulative, so please bear with me...)

So, we picked up the ring on Monday, yesterday I told my staff, and now it's public knowledge. So now I can blog away!

Pictures? Did you say you wanted to see pictures? Well, here ya go! 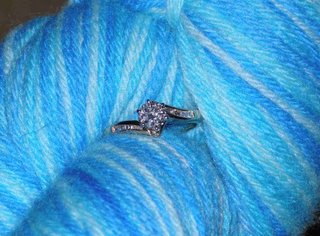 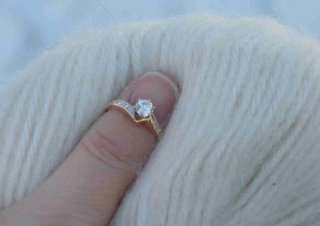 And here it is next to some brushed alpaca. I picked up 6 balls of this stuff (marked down) on Saturday at The Yarn Shop in Uxbridge, Massachusetts. I thought it would look nice with the ring. (Anybody got any suggestions for what I should do with this yarn?)

And here's a few final pictures... 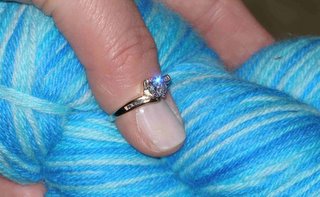 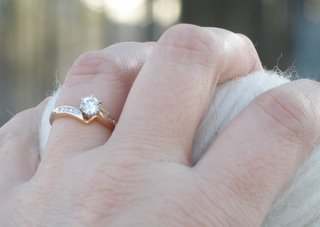 So there you have it! I would have blogged about this sooner, but work got in the way. (We're still working on the book-that-shall-remain-nameless.)

There will be more knitting content in my next entry, I promise. I've got to start training for the Olympics, you know.

Best wishes to you and Jim. Hoo and also ray!

Ahhhh. The pictures just don't do it justice; the ring's even more stunning in person (as are the Vesper and that brushed alpaca).

Very first time visitor to your blog! And I get to say congratulations!
Great bling, for sure~

Congratulations!!! I know it's months after the fact, but I'm so happy for you. I hope all is well in Aspen-land, even with the book-that-shall-not-be-named. Gosh, really, congratulations.