Greetings from the passenger cabin of the Susan B!

(Actually, I’m only writing this on the boat, not posting it from the boat, but please play along.)

I’m on my way back from a sweltering weekend up in Massachusetts. The LHA had it’s TimeLine event at Borderland State Park. Jim and I hoteled it instead of camping, and boy was I happy to have air conditioning and running water! Saturday was the worst of the heat. I found this guy on my car as we were leaving the hotel to go to the park. 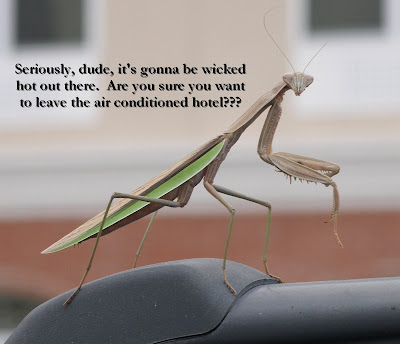 Yeah, it was freakin' hot, alright. And time warped too. Where else would you see these guys in the same place? 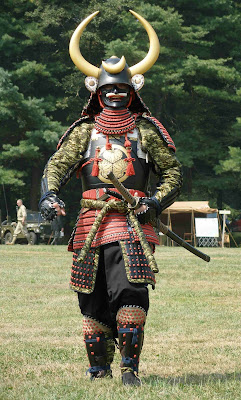 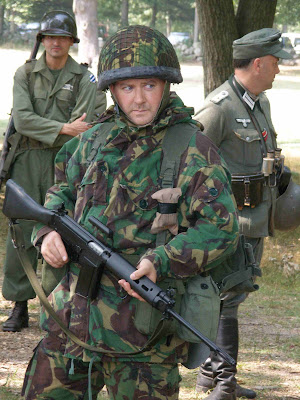 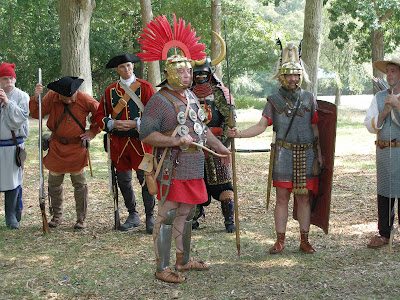 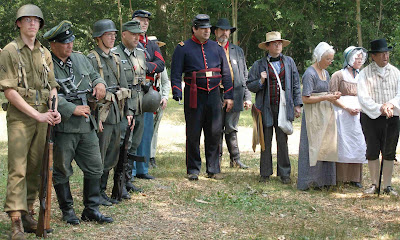 And a variety of other time travelers. 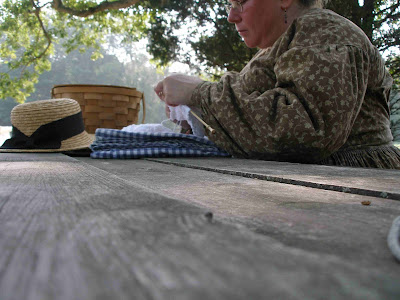 And yes, there was a little bit of knitting. In the shade, of course. Another dishcloth. 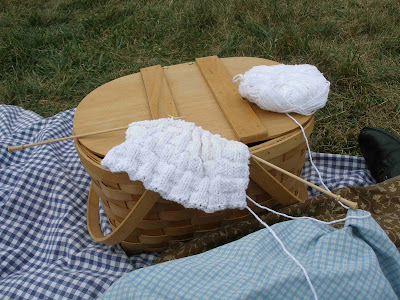 Instead of having dinner in camp, since we weren’t camping and didn't bring anything in order to cook, and we were lucky enough to have dinner with Carole! 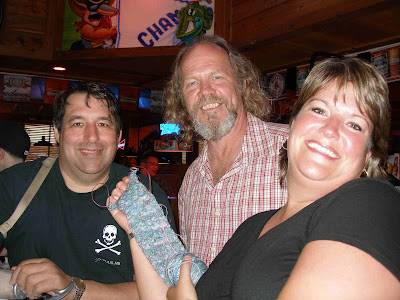 Dale couldn’t stay for dinner (he had a gig), but I was thrilled that we at least got to have a drink with him.


We had a blast! We talked about reenacting and work and knitting and yarn and all sorts of stuff. Good food, great company! Of course, we each brought a sock--she brought her finished Monkeys, as well as socks she's working on for Hannah (lucky girl!), and I brought my little handpaint sock.


It was so great to spend time with Carole. I wish we could do it more often, but the distance thing is tough. But I'll keep trying every time I'm up in her neck of the woods.


Jess--you're up next for a visit! And Jenny too!

Here's something new for you--an early morning post by moi. I'm starting my workday from home today with my Friday morning conference call to our outsourcer in Chennai. We usually start this call at 10:15, and it lasts anywhere from 1 1/2 hours (if we're lucky) to 3 hours, but for the last couple of weeks of summer we're giving her a little bit of a break on the start time so that she can leave work earlier than usual. (It's 9 1/2 hours ahead there, so you do the math).

After that, I'm packing up the car and driving in to work so that I can head straight up to Massachusetts for the weekend. A reenactment thingy. Up in Carole's neck of the woods. However we're camping at a Country Inn and Suites. (Long story, will explain later.)
I don't have many pix on my work notebook, but I will leave you with a teaser for my next post... 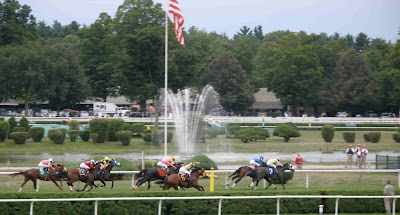 And yes, there will be knitting content!
Posted by Elizzabetty at 7:42 AM 2 comments:

A while back I posted about how far behind I was reading my bloglines. I've caught up on some, am still behind on others, and got caught up and am now lagging behind. Sigh...

However, there are some that I do manage to read regularly, and today I was pleasantly surprised when Joan from Knitting & Other Nonsense in Edith's House picked me as one of her five Rockin' Girl Bloggers.

So, it's only fair that I post my choices for Rockin' Girl Bloggers. I could go on and on about so many rockin' bloggers, but here are my five:

How I spent my weekend

I worked this weekend. Both days. Full regular type days (the 10-hour variety), only without the normal interruptions.


But enough of that--let's look at a sock! 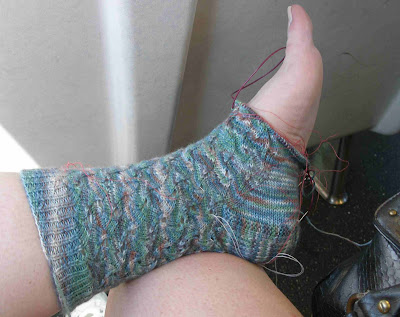 Gusset decreases are done. Now we're heading towards the toe. (Is it just me, or does lace knitting take longer than your basic ribbing?) 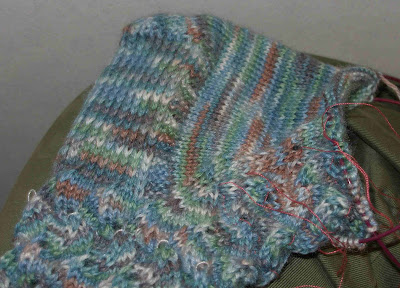 Here's a gusset closeup. I messed up something with one of the decreases, but that's OK. It's the little flaws that give them character.

Aside from getting some sock knitting done on the train, there was one good thing that may have come from working all weekend. I think I cleared my week up enough that I should be able to meet Punkin at Saratoga Race Course next Monday! Cross your fingers that I'll be able to get away this weekend, please?

And speaking of Punkin, yesterday was her birthday! Why don't you head on over to her blog and say hi! (She's got lots of pictures of FO's--including mucho socks!)
Posted by Elizzabetty at 11:45 PM No comments:

A couple of things to show you

Man, it's been a couple of busy weeks here. So here's what I've been up to... 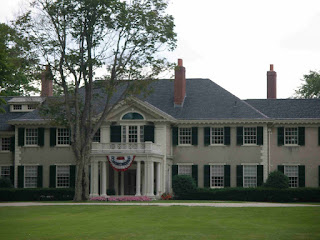 Made it up to Hildene for our living history event two weeks ago. 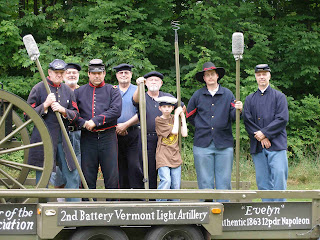 And here's a gun crew in search of a gun. (God, will this ever get resolved???)

And while sitting on the front lawn of the mansion, I made my first dishcloth! 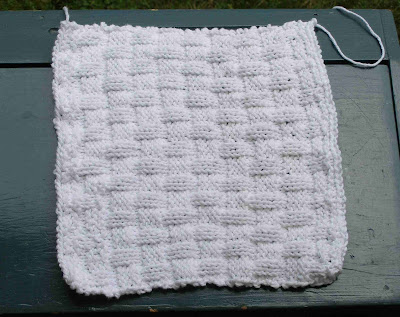 I can see how these little puppies can be addictive. This one was promptly gifted to a Sanitary Commission group that so graciously invited me and Jim for dinner in their camp Saturday night. Wonderful food and even better company!

Last weekend--a visit with Punkin and her family. Brought my dulcimer and viola. Her DS loved the dulcimer (despite the unhappy face he made for the camera), although not as much as the my swift and ball winder. Her DH really like the viola. Wants to borrow it sometime for a gig. I really should start playing it more myself...

Sandwiched in between the weekends? Work, work, work... some knitting on the train... more work. But this week I did get to meet Punkin at The Village Knitter for Knit Night. Even left work early to get there after staying up until 3 in the morning the night before to finish reviewing a slew of project schedules. Blech!

I have to go into the office both days this weekend. Blech-blech! Me thinks the time to make a change is going to come sooner than I was planning...

Next time, an update on my handpainted sock. Slowly but surely I'm making progress...
Posted by Elizzabetty at 2:15 AM No comments: