...to you all! (I know, it's been a while. Work, Christmas prep, travelling...) I hope all of you are having a great holiday season so far, despite the hectic-ness of it all. For me, there was a cookie decorating party... 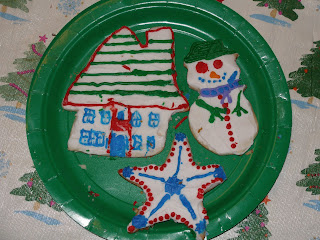 An artist, I'm not, but it was fun. The house cookie is an interpretation of my house. 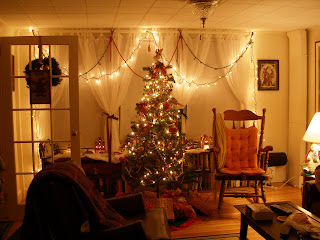 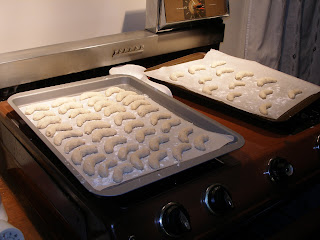 ...and leftovers from Christmas eve dinner at my house... 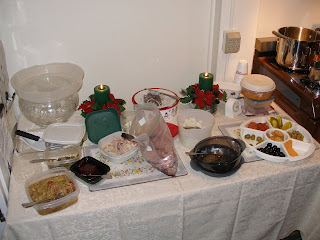 Lots of leftovers. (I was so busy cooking and serving that I forgot to take a picture of the mounds of food.) And men to feast on the leftovers. 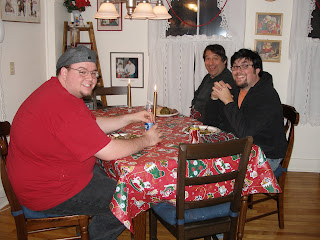 There was even some yarn shopping at Webs--both before and during the big end-of-year sale. If you're in their neck of the woods before January 5th, do yourself a favor and go take a stroll through the store. There's lots more available that isn't listed on their website. I don't have pix of the yarn yet. It's coming.

On the knitting front, I don't have much to show. I finished a hat for Jim's son, but that's about it. I'm working on hats for my nieces, which were possibly going to be Christmas presents but I ran out of time/energy. I'm planning to spend New Year's Eve on knitting projects, so I'll have pictures to show you next post.
Posted by Elizzabetty at 9:56 PM 1 comment: 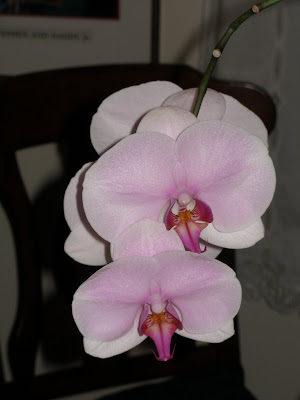 Not knitting content, but it's mighty purty. This is my orchid (purchased at Ikea, of all places) that's living up in Vermont. It's been in continuous bloom since late May. May! I've never seen an orchid stay in bloom that long. Whatever Jim's doing to it, it clearly seems to like it.
Posted by Elizzabetty at 10:36 PM No comments:

What I've been up to lately...

A little knitting. Damn little, actually. Over Thanksgiving weekend, up at the house in Vermont, I managed about five rows on the baby sweater. But I wasn't exactly a slacker either. There were windows. Lots of windows. Cleaning them, insulating them, putting up hardware and drapery on them... 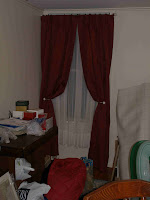 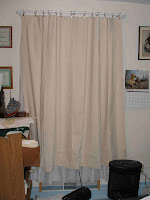 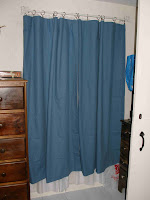 (I don't have any pictures of the saran wrap covered windows, but trust me--there's 17 of them, all wrapped and shrunk.)

And there was a new slipcover for the couch... 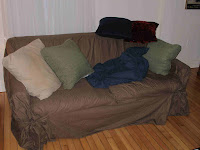 (and lots of pillows to cushion the couch) 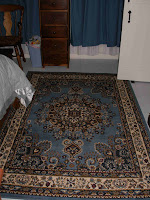 (a $20 Black Friday special at Lowes)
And some Christmas decorating... 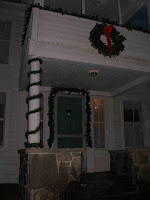 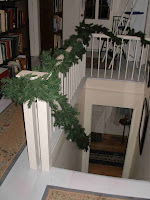 And I put together a kitchen cabinet for my new range hood, and installed a roller shade that didn't want to be installed (long story, long struggle), and... well, I think you get the idea. I spent my four-day weekend in Vermont making up for all the time I haven't spent in the house since August.

Since Thanksgiving there has been some knitting. I finished up a baby hat for Knit Unto Others. 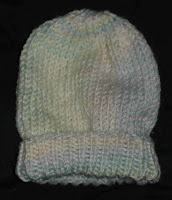 If it wasn't for the constant work in the house last weekend, I would have had a couple of more items. Oh well, I'll keep at it. After all, I bought this stuff

from Webs on Black Friday specifically for charity and gift knitting.

Well, that's it for now. Thank you for the kind comments on my last post. The atmosphere in the office still sucks (and will for a long time to come), but things are settling down a little bit. Through the end of the month a lot of people will be taking time off, so I should be able to get things done without a lot of interuptions. And maybe I'll have time at night to blog!