So last week I told you that I had started going to a crochet class with my mother at my local high school. My motivation for learning crochet? In order to finish this baby sweater, which just needs a crochet edging to be done. 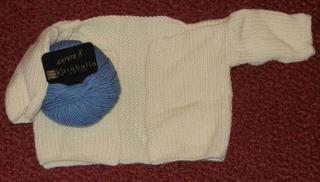 It's the cute little baby sweater in Beginner Basics from Vogue Knitting's On the Go series. I made it with Karabella's Aurora 8, and I bought the cutest buttons for it at The Point, but without the edging, I can't finish it.

However, in my first class I also learned some unexpected things from (and about) the woman teaching this course (my reaction to these is in blue):

As much as I wanted to blurt out "what the hell are you talking about," I behaved myself and figured I'd set my mother straight later on. And then, just when I thought, "Stitch marker?!?!? What is this woman doing teaching this class? Well, as long as I can learn the basics I'll stick with it..." the following exchange took place in class:

She pulled the 9-11 card. Unintenionally, of course, but now, I'm feeling like a big jerk. I can't pick on her. That would make me a bad person.

And so, what have I learned about myself?

Give me liberty... or something...

I'm so sorry that I haven't posted recently, but life's gotten in the way. (Well, it's actually work that's gotten in the way, but that's par for the course this time of year.) In any case, here's a quick update on the weekend...

I spent the weekend with Jim (my significant other) at a Rev War reenactment in Rehoboth, Massachusetts. Beautiful weather and a really fun event. Jim finally got to wear the Liberty Cap (also called a voyageur hat or a toque) that I made it for him from a Smoke and Fire pattern. It's almost finished--I just have to stitch the words "Unite or Die" on it. (Liberty caps sometimes had phrases stitched or painted on them, and he thinks that it would have been funny to have a man wear the cap in bed with his wife with the words "unite or die" on his cap--hint, hint. Yeah, my guy's a regular comedian.) Here he is wearing his almost-finished cap to bed Saturday night. Cute, huh? 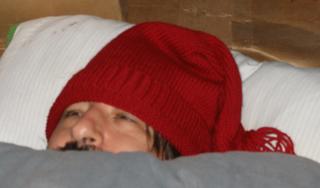 Here's a picture of Jim's sock watching the British get their butts kicked. 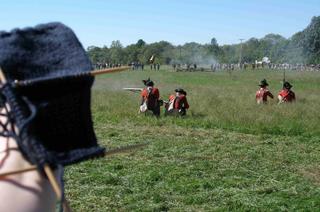 And here's one more picture of from the battle, just because... 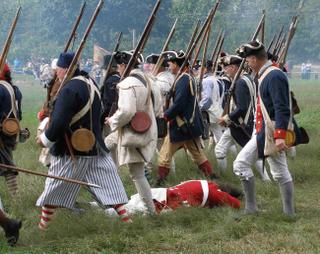 I managed to get quite a bit done on this second sock this weekend and my gussets are looking much better. I'm tempted to frog the first sock back to just before the heel flap and redo it so that it looks better, but I'll make that decision once I finish this one.

Well, I think it's time to call it a night. Got another crochet class tomorrow night (class #2 of 4). I'll have to fill you in on this crochet class/course in my next posting. (It's been an experience, I tell ya.) Good night all!

Oh, just one more thing--I'm sooooooooo jealous that Carole got to go on a big shopping trip with Norma at Kaleidoscope Yarns in Essex Junction. (Just look at the stash in those pictures!) But then this is the continuation of Carole's big birthday celebration, so it's all good! You go girl!!!

From the Big Apple to the Big Easy...

Tonight's the night of the big Katrina benefit concert at Madison Square Garden. My man was performing tonight, along with a whole lot of other people. I managed to buy tickets for it last Tuesday and was really psyched about going. 100% of the proceeds are going to various hurricane related charities. Ticketmaster didn't even charge any of their usual rip-off fees! And because I charged them on my AmEx card, American Express donated an additional $20 per ticket. Pretty cool, huh? Well... just minutes after I received my e-mail with the tickets from Ticketmaster, I went to block out the time in my calendar at work and saw this:

Crochet class at high school with Mom--Sept. 20th, 7-9pm
Yes, I bought tickets for the concert on the same night as the crochet class that I signed up for with my mother. I'm such an idiot! If it had been just me, I would have blown off the first night of class. But no, I've committed my Tuesday nights for the next four weeks to Mom. This is not the kind of bone-headed thing that I might normally do. But of course, I really had no choice but to skip the concert. Since everything was going to charity, it really didn't care about being out out the money for the tickets, but I felt bad that potentially these tickets for what promised to be a really great show might go to waste.

Fortunately, I was able to sell the tickets to someone in my office who is also a big Buffett fan and would really appreciate the line up and she's taking along a friend of her's who's been unemployed for a while now. (Jennifer's such a good person!)

And... as it turns out, they put this concert on Pay-Per-View tonight (again, proceeds going to charity), so I was able to start the VCR before I left for the class and I got home a half hour before Jimmy came on and did a 40 minute set! My sister even made me a giant 16 oz. margarita! (I think she felt really sorry for me when I was running around the house yelling "where's the tequila? I can't find the tequila! Don't tell me we're out of tequila!!!".) We even got my mother to do the fins thing (fins up; fins to the left, fins to the right, left--right--left--right). So, I think that in the end, it was an evening of good Karma everyone!

Oh, and about that crochet class... I'll tell you about it in my next post. For now let's just say that I just couldn't figure it out, but after tonight I should be able to finally finish this cute little baby sweater I made that needs a crochet trim to be finished.

And now for something completely different...

Must have been all that New Orleans' partying going on tonight!

Yes, today really is International Talk Like a Pirate Day. Who knew?

So in honor of pirates everywhere...

And, of course, my favorite pirate guy... 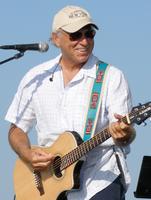 You'll be seeing and hearing a lot more in my blog about this guy as time goes on. There's even a teeny tiny knitting connection to this picture--but yer going to have ta wait for the story on another day, matey! Arrrrrrrrrrr.....

Posted by Elizzabetty at 8:19 AM No comments:

My first post and I've got comments already! I love you guys!!! Of course, now the challenge is to continue posting and adding stuff. Oh, the pressure... must knit to relieve the pressure...

Which brings me to today's topic--my knitting studio. Below is a picture of where the majority of my knitting is done. 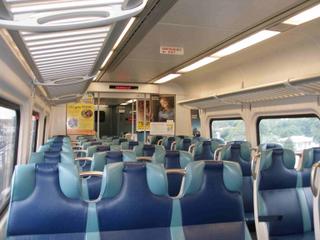 That's the 9:10 a.m. out of Babylon to Penn Station (a little later than the train I usually take--I was tired this morning). I spend about two and a half hours on a day on the train, and what better way to pass the time than to knit!

This morning I was working on the Malabrigo arm sock. Here it is: 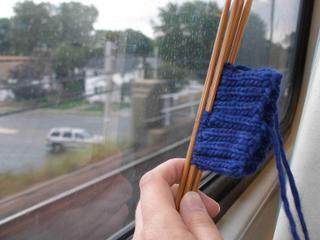 This was really just minutes after leaving Babylon. I worked on this for about a half hour, then switched to the pink and blue sock. For small projects like socks, hats, and baby clothes, the train is a great place to knit. Sweaters can present a problem. Straight needles longer than 10" are impossible to deal with when the train fills up (no flapping room, if ya know what I mean), so I try to either use circulars or just work on sleeves with shorter needles. And this turns out to be yet another rationalization for having multiple projects going at once--not everything will work on the train! (OK, I know it's a lame excuse, but just humor me, please?)

Well, that's all for now. I promise that future posts will have more pictures of my other current projects. I mean, look at that list over there--I really do have all that going on! Now I just gotta prove it to ya. G'night all!

Posted by Elizzabetty at 11:39 PM No comments:

please note the deafening sound of crickets...
OK, not quite the monumental moment I would have liked, but, well, at least I'm taking some baby steps. As long as life doesn't get in the way too much, I will hopefully add to this over the coming weeks and turn it into something that people will want to read.

And now on to the reason for this blog's existance--KNITTING!

My yarn obsession of the moment is Malabrigo. A wonderfully soft, luxurious piece of merino heaven, which just begs to be touched, held, fondled... See, I told you it was an obsession! I'm currently using it to make an arm sock for my significant other. After all, winter is coming, and living up in Vermont (he does, not me, but that's another post for another day) it gets mighty cold at night. So, what better to keep him toasty warm than an arm sock made out of the best yarn ever!

And now my first pictures! The sample swatch I made for sizing, and the sock on the needles. 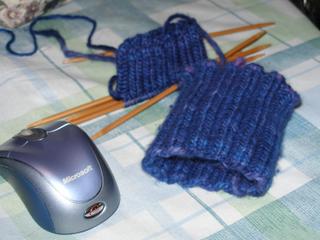 Isn't the color yummy? It's called "Purple Mystery," but it looks a whole lot more blue to me than purple. I bought the skein at Webs in Northampton, MA. 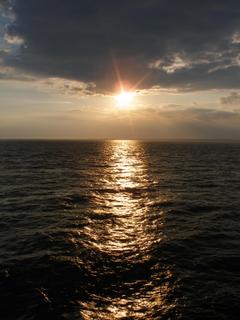 Well, I'll leave you with one more picture--Long Island Sound as I took the ferry from Orient Point to New London this summer.