Earlier this afternoon I was writing an e-mail to Punkin and I realized, "gee, this would really be a good blog entry." So with a little editing, here ya go...

Punkin has been raving about The Wonderful Wallaby, and naturally she's been telling me that I should make one. Last week we were chatting about what projects I would take with me on my Elderhostel trip, and she brought up the Wallaby. And it got me to thinking--all stockinette, knit in the round, it just might be the balance I need right now. But I really don't have any sweater yarn in my substantial out of control yarn stash. Just some Elisabeth Lavold Angora, but not quite enough for the size I want to make. And I can't really justify spending money on yarn for a sweater right now after coughing up nearly a grand for this semester's classes, not to mention my car insurance that's due shortly and the Forester needs four new tires....

I wandered all around the warehouse, but nothing that I really liked came close enough to the magic number. So I wandered around the store. I was thinking about biting the bullet and getting some Cascade (my first choice for the Wallaby), but then I remembered that they now have their own version of Cascade--Valley Yarns Northampton. More yardage (247), lower price ($5). I found a color I liked (dark gray, heathery), so I decided to buy 10 balls to make the really big Wallaby. And then I thought hey--if I just spend $10 more, I'll get the discount. So despite pawing fondling drooling over considering a skein of the Classic Elite Alpaca Sox, I decided to look for something for Punkin (yes, I'm rewarding the enabler, and I know it's wrong) and I found this really neat sock yarn for her. It's not her favorite, but I think she'll like it just the same. (There's one part of her present that I think she's really going to love, but I can't talk about it yet because it will ruin the surprise.) And with that last selection, I got my 20% discount and a really cool new project! 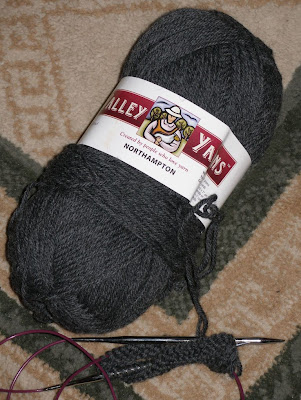 I started swatching last night and hope to cast on for the sweater by Tuesday night. My goal is to finish the Wallaby before we return to Boston. Think I have a chance? 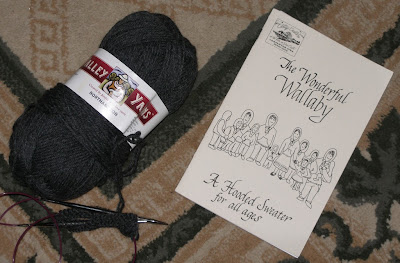 By the way, we have mice. I put a trap down in the pantry last night (after seeing evidence of their presence) and had one in it this morning. They probably came into the house last month when Jim moved stuff into the attic from the storage space in Wilmington. I'm not thrilled.

Now before I get flamed, let me just say that I'm really not thrilled about the traps, but I don't have a choice right now. I don't live here full time, and, well, I saw the first evidence of the mice Labor Day weekend--4 weeks ago. And Jim didn't do anything about it. And now we're/he's going to be gone for two weeks, so who's going to release them from those live-catch-and-release traps that I'd really rather use? They'd die a slow death instead of meeting a relatively quick end. So, I'm sorry little guys...

And besides, if they're not going to help pay the mortgage or contribute to the household, then they can't live here.
Posted by Elizzabetty at 11:28 PM 2 comments:

We have a winner!

And the winner of a lovely skein of Seacoast Handpainted is... KC! As soon as she sends me her snail mail address, the skein will make it's way to Germany! Wow! Such a world traveling skein!

OK, I know, I'm a baaaaaaad blogger. I'm an even worse Ravelry-er. Yeah, my invite came in August. I've done less there than on my blog. Truly sad...


Well, after spending this past weekend at home, I'll be back on the road again this weekend. I brief visit to the house (a.k.a. Moose Manor), and then on the road with Elderhostel.


So you'd think that the house visit would be for a little R&R before hitting the road, right? Wrong! The house has needs, like a need for more cleaning. Probably need t0 mop up the floors one more time. And maybe do my little Murphy's Oil Soap dry-up-the-excess-water-off-the-floor-with-an-old-towel-and-a-little-twisting dance... 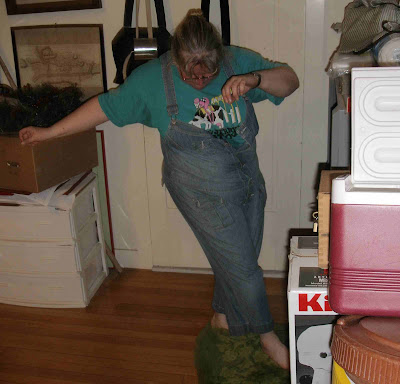 Random thoughts for a Tuesday

All that thinking about travelling's got me tired. Time to go get some rest. I leave you with a peaceful picture... 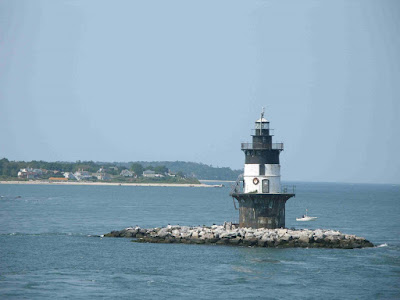 First off, thanks for all the comments! It's been really cool to check out some new blogs! 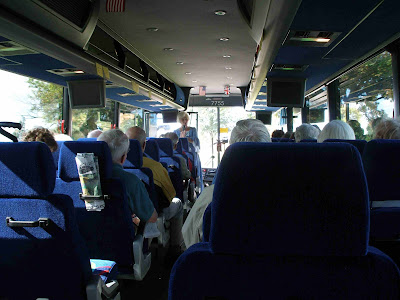 On Saturday we headed out to Valley Forge with our Philadelphia guide. Jim and I sat in the back of the bus, he was reading, I was working on the sock.

Once at Valley Forge, we came upon a group of reenactors were setting up a cooking demonstration around the winter quarters area. The seniors found it all very interesting. 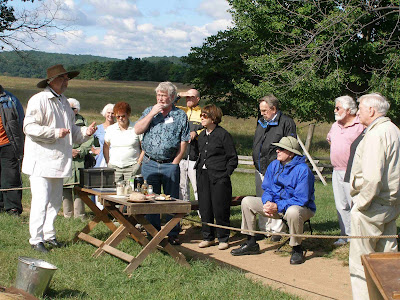 I was a little concerned about what might be on the menu. 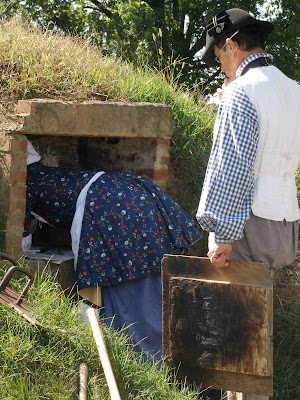 The sock chose to hang out by a hut... 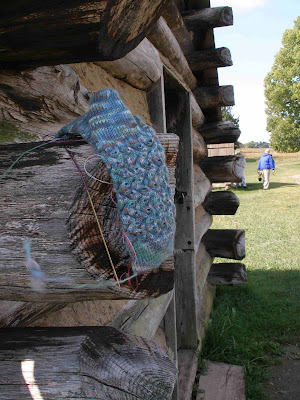 All in all, everyonething had a good time. 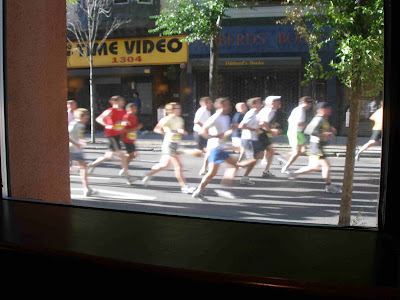 Our hotel was located around the 3-mile mark. Initially we saw the elite runners go by in a tight pack. Chasing a truck. Not too long after that, we saw this. 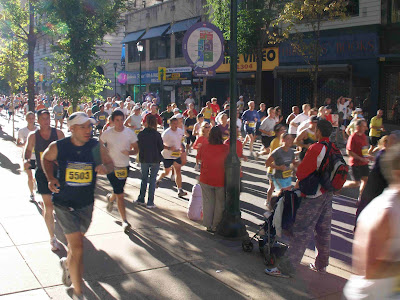 Hoards of runners! 15,000 of them! I've never seen anything like it. Some of the runners came into the hotel--to use the bathrooms. Little did they know that you need a room key to use the lobby bathrooms. Not good planning on their part, but who'd a thunk it?

Anyway, once the runners past we all headed over to Independence Hall for our morning tour, and then we had the day to ourselves.

For lunch, Jim and I passed on our lunch vouchers at The Bourse in favor of my favorite sandwich chain! 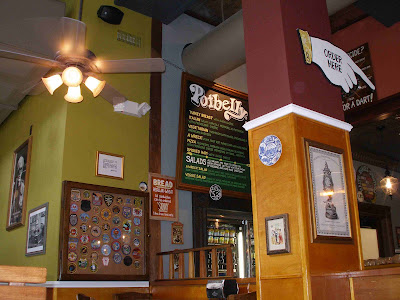 Chicago's Potbelly Sandwich Works has come to Philly! Just a block away from our hotel!!!

I don't know what it is about their sandwiches, but they make me sooooooo happy!

After that, we headed back to the hotel for an hour's nap. Three hours later (!) we headed back to the Independence Hall area for a little more souvenier shopping, then dinner, followed by drinks at City Tavern. (We've been trying to get the tour company to add a meal here to this trip. It would be perfect for this program!)

No yarn shop visits this time around, but was still had a great weekend.
Posted by Elizzabetty at 11:53 PM No comments:

Happy Blogiversary to Me!

Last year I totally missed it, but this year I was determined celebrate. It's my Blogiversay! Two years! Woo-hoo!!! Despite some rather spotty postings at times, I'm still blogging.

I originally started this blog with two goals: first, to document my knitting and stash accumulation accomplishments, and second, to improve my writing skills by writing regularly. I've been able to do that. However, it's also brought me so much more. I've met some wonderful people--both in person and virtually. I've found some cool blogs. I've been able to share happy times and sad times, and even some crazy times. I've even had the thrill of a rock star moment--when Stephanie left a comment on my blog! Little ol' me! Who'd a thunk it???

So, to celebrate my blogiversary with you, my faithful readers, we're having a contest! It's simple--leave a comment and you'll be entered to win a skein of sock yarn. Wanna see what you'll win?

So, tell your friends and family to come on over and take a look. Never left a comment before--what better time to de-lurk! If I get lots of comments, I'll toss another skein or two of sock yarn into the prize mix. There more the merrier!

Just on note on comments--I don't know what it is about Blogger.com, but I don't always get e-mail addresses with comments. If the winner's e-mail address doesn't come through with their comment, I'll post to them here on the blog.

Thanks for sharing today with me!
Posted by Elizzabetty at 12:01 AM 5 comments:

This afternoon I'm taking Amtrak down to Philly to meet up with Jim and his Elderhostel group for the weekend. (We're having dinner at Italian Bistro--mmmmmm... I can't wait!) I'm taking my computer with me (personal notebook, not my work notebook) so that I can blog because... tomorrow is my two-year blogiversary. And what's a blogiversary's without a contest??? ;-) 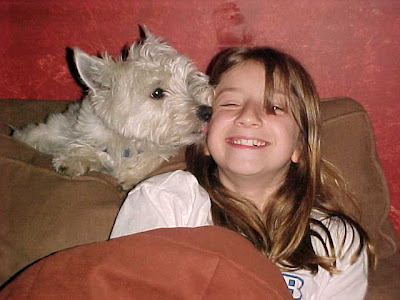 my niece and Bunker, the wonder Westie...

Well, actually, I've got some Cascade 220 for a sweater for the beast. 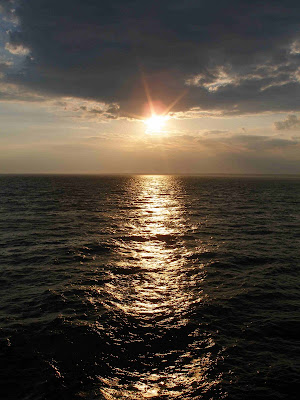 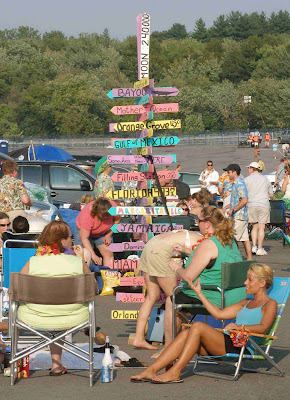 This popped up a few cars over within 15 minutes of our arrival. Wow, these parrotheads move fast! Their clearly not from the port of indecision.

My two sisters, Jim, and I had our own little piece of Margaritaville goin' on... 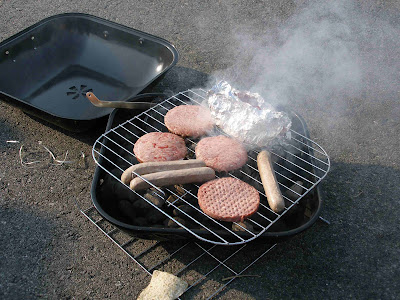 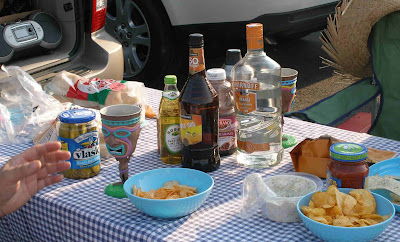 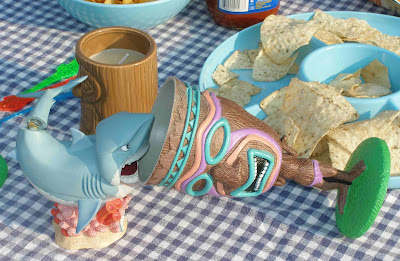 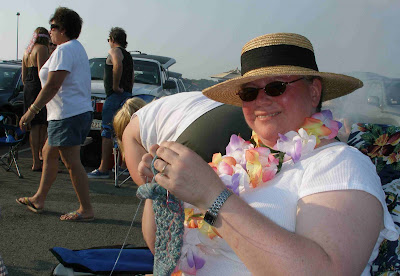 ...and I didn't lose a stitch in spite of the bottomless martinis! Woo-hoo!!!
The people you love... triple check!!! 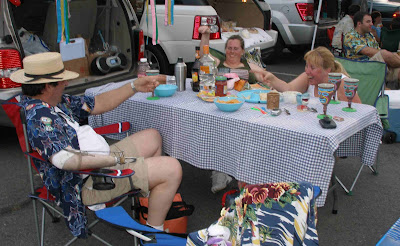 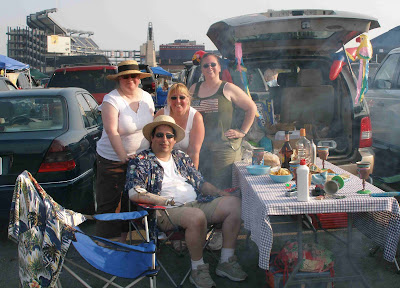 Ahhhhhh... what could be better? 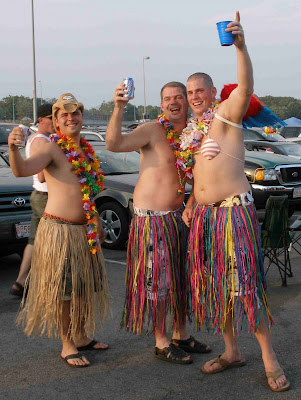 OK, maybe not these guys... 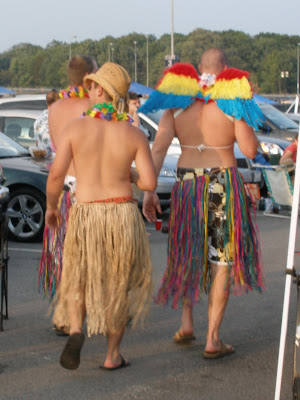 How about a little more sock knitting... 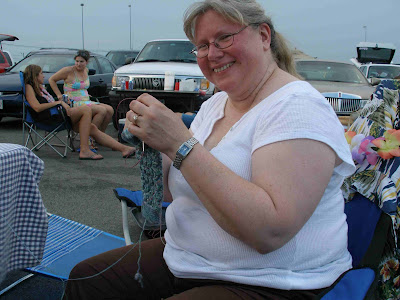 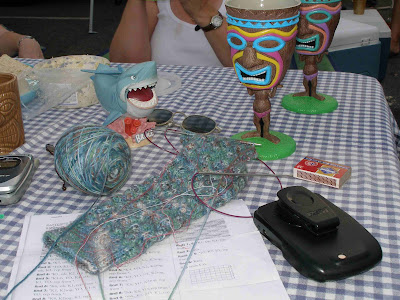 The CrackBerry and cell phone? Those are for sending drunken personal e-mails (no work e-mails allowed) and playing telephone tag with Carole in the parking lot. 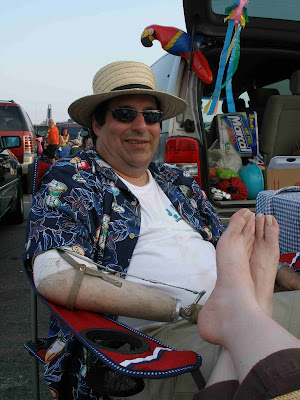 Here's my version of a Cheeseburger in Paradise... 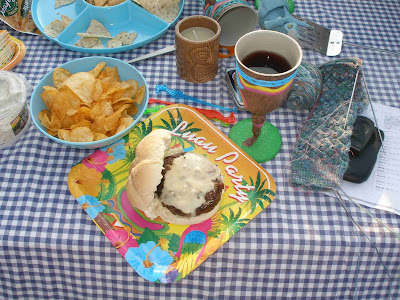 It doesn't get any better than this! 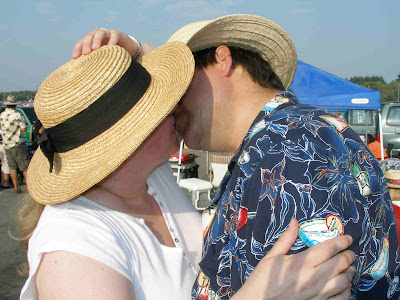 And with a little love and luck we'll get tickets the next time Jimmy comes to town!
Posted by Elizzabetty at 11:45 PM 2 comments: