Life here in the swamp

Fall is rapidly approaching, and as is usually the case this time of year, I'm swamped. Mostly work right now--and for the last month or so and the coming months as well. In a couple of weeks I'll be traipsing around the northeast with my honey pie, ed-ju-ma-cating senior citizens on the American Revolution. (That's him doing the educational stuff; I'll be taking their lunch orders and confirming tour guides.) My paralegal classes start back up in mid-October. Probably the biggest thing this fall is looks like it will be a business trip--to Chennai, India! My first time traveling internationally (if you don't count Toronto, which I do). Nothing has been finalized yet, but it looks like I'll be going there to visit some vendors in November. There will be more details about that trip as we finalize them, but for now, how about some crafty stuff!

There's been some knitting (mostly on the train) of my ladybug sock...

...but mostly it's been about sewing--making roman shades for the house. Warm Window roman shades, so that we can get the most out of our heating oil pre-buy we did (ouch!). I've been working on a test shade for a small window in one of our bathrooms.

This "test" shade was done with muslin as my cover fabric. Good thing, because the first muslin I cut was just a little too narrow--so I had to deconstruct it and redo the muslin part from scratch. Not too painful at $2/yard.

Next up with be a big shade to block off the staircase and keep the heat downstairs during the day. I even picked out some pretty fabric that matches the runner in the foyer.

Hopefully I'll get to start this one this weekend. Eventually I plan on making these for most of the window in the house. Something to counter that "40% heat loss" mantra that the house inspector muttered every time he walked in to a different room. (Single pain, not-so-tight-fitting window sashes...)

Oh well, gotta go back into the muck. More crafty stuff in a few days...
Posted by Elizzabetty at 7:02 PM 4 comments: 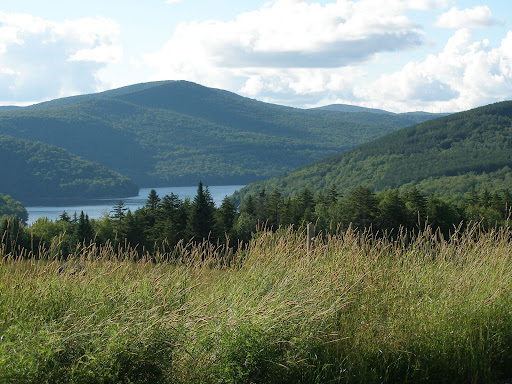 A view of the Harriman Reservoir from a hill in Whitingham, Vermont.
Posted by Elizzabetty at 6:53 AM 1 comment:

I've seen this on a few blogs, and thought it might be fun to interview Jim.

Me: What is your favorite thing about my knitting?

Jim: It doesn't involve me [laughs].

Jim: [more laughter] I don't have to do anything for it. Oh no, I'm joking. Ask me the question again.

Me: What is your favorite thing about my knitting?

Jim: I get free warm stuff.

Jim: And Vermont is a very cold place.

Me: Yes, it's getting colder by the day

Me: OK, next question. What is your least favorite thing about my knitting?

Jim: My least favorite thing... um... having to hold up various articles your knitting so that you can take a picture of them in some ungodly place, so everyone can look at the poor man holding up half knitted item of some sort.

Me: That's not a good answer.

Me: But you dress in britches and a waistcoat and perform in front of people. How can you be shy???

Me: Alright. What is something I have knitted that you recall as being good?

Jim: Hmmm... my liberty cap! Unite or die!!! It's a feisty cap, and it works pretty well at these programs.

Jim: A couple of times now.

Jim: Yes, it gets a chuckle.

Me: Do you think knitters have an expensive hobby?

Me: That was a good answer. OK, I think you've already answered the next one: have I ever embarrassed you, knitting in public.

Jim: See above. [laughing] Your knitting doesn't bother me, but the holding stuff does.

Me: Do you have any hobbies?

Jim: No, I merely have avocations that cost far more than a hobby.

Me: Do you know my favorite kind of yarn is?

Jim: I think it's Malabrigo.

Jim: What did you think--that I was stupid.

Me: [groan] Well, that just killed a good answer.

Me: Can you name another blog?

Jim: Or maybe Captain Bly. Mutineers all ended up on Pitcairn island,

Me: Oh, god... Next question--Do you mind my wanting to stop at yarn shops wherever we go?

Jim: Uh, only when it cuts into my going to a museum, [laughs] especially if there's not enough room in the car for me to comfortably nap.

Me: Next question--do you understand the importance of a swatch?

Jim: I think if you like get one in your eye it could be a problem, but I really don't know what a swatch is, no.

Me: Do you read my blog?

Jim: I have read your blog, once in a great while.

Jim: But I haven't read it much 'cause I find it best to avoid personal embarrassment. Too many pictures of me holding up knitted items in embarrassing places.

Me: Yeah. I don't think you should read this blog entry. OK. Have you ever left a comment on my blog?

Jim: No, only with the blogger. I have no shortage of comments... but I have left comments on the blog, I think... yes... oops.

Me: Do you the house would be cleaner if I didn't knit?

Jim: No. Nope. I don't think that it has any effect on that.

Me: OK. I think that's enough.

Jim: Too bad. I think I was starting to get into it. Well, you're all knotted up in your hobby.

Me: Really. That's enough. Thanks, dear.

Not a drop of rain for a change!
Posted by Elizzabetty at 11:55 PM No comments:

Very ominous looking all over the northeast, but especially here in Vermont. 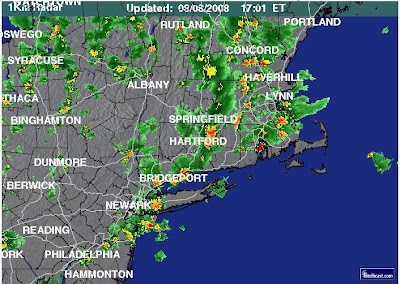 Here's hoping that the orange and red blobs are staying away from you!

The Village Knitter in Babylon Village is now carrying Dream in Color!

Classy! (plus the pink yarn in the lower left corner is Baby!)

At knit night last night we ladies bought up about a third of the shipment Karen received! Yeah, we likes it!

And now for something completely different, the never ending blooming Vermont orchid!

Have a great weekend everyone!