Before I get into the ugliness, I hope everyone had a wonderful holiday. I had planned to post a "happy holidays" entry, but last minute preparations for everything got in the way. I'm lucky I managed to have clean underwear to pack for my Christmas trip north.

OK... so you remember all those mysterious Christmas Gift knits I had listed on the side there? There were, like, six things listed. I started pretty much everything earlier this year. Yeah, well, out of the six things I got two done--the girls' sweaters. That's it. Nothin' else. The other items? Here's a status report:

I don't know what happened. Everything was planned out well in advance. But coming down the homestretch, I collapsed like an old nag. Seriously, though, I think the combination of work, the transit strike (with its 2+ hour commute each way), last minute Christmas shopping, and scrambling to finish the girls' sweaters a week earlier than planned did me in. (Plus my thumbs hurt. I think it from the intense hotel knitting.) It all burned me out. I last touched the socks on the train home on Thursday night (the only ride last week where I managed to stay conscious that whole way). Until last night, I hadn't picked up the needles since then, and even at that I knit 12 stitches of Jim's armsock and called it a night.

Maybe the deadline thing just doesn't work for me. I'm thinking that maybe I should just start and finish the items whenever I do, and people will just get random gifts of knitting. Whenever it's done, it's done. Maybe I just need some time off to rest and regroup.

This weekend I'll be heading back up to Vermont for a week off. Maybe a little quiet time with some Malabrigo will help me relax.

In the meantime, here's the picture of the peaceful holiday village that I was going to post for Christmas. Hope you enjoy it, even if it's a little late. 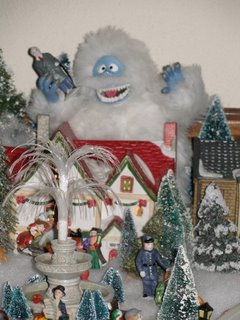 Posted by Elizzabetty at 1:23 PM

Hey, go easy on yourself. Christmas knitting is rough. That's why I don't do it. I want to make someone something, I just do it when the mood strikes. Much less pressure that way!