The Birthday Yarn Crawl—Part One

I spent Thanksgiving with my mother and youngest sister, but Friday morning I headed up to Vermont to spend an extended weekend (and my birthday) with my sweetheart, Jim. I started my trip north on Friday with a stop of Fabric Place in Cromwell, CT—site of my Malabrigo obsession a couple of weeks ago. My friend Elsie loved the skein of Stonechat I had bought, so I picked up one for her. When I gave it to her this week, she cuddled it like a puppy. (I’m telling you, the Malabrigo has powers…) Of course, this followed me out of the store. 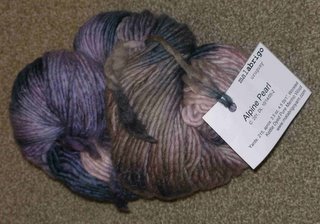 I’m such a Malabrigo ho.

Then it was back on to the interstate and an hour later a stop at Webs. I didn’t get out of there as easily as Fabric Place, thanks to a sale on this: 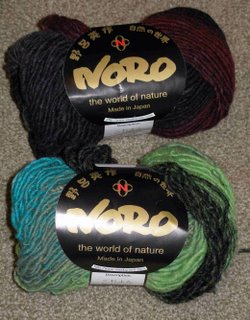 I picked up two skeins of each. (The bottom one is definitely going to be some Hurry Up Spring Armwarmers.) I had a third color in my hands, but wound up refraining. I also picked up some Debbie Bliss Cashmerino Superchunky for some more hats (one a gift, the other I don’t know). In the warehouse area I managed to find the last three balls of Karabella Majestic in a medium blue. Perfect for another pair of socks! In all, I spent enough to get their 20% discount on everything but the Noro, which was a bahgain at $6 a skank skein. After I closed the store, I stopped here for some wine, here for some groceries, and then arrived in Vermont around 9pm.

Then Saturday afternoon I went up to Adams Farm for their spinning circle. I love Adams Farm! I try to go to their knitting circle on Sundays when I’m around, but because Jim and I were going to be away this weekend, I stopped by on Saturday. It was so good to see Jenny and Elizabeth, the women running the spinning circle, and they helped me to do some spinning with a hookie stick and a spindle. See what I made! 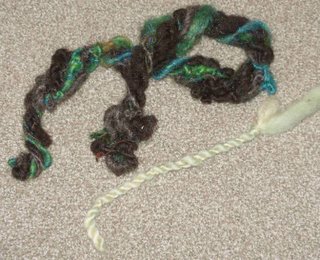 The greenish one is plied; the other is a small (maybe 3 yards?) skein of yarn made from three different fibers. (I'll swatch it soon to show the differences.) I had attempted this last spring but found it difficult and awkward. This time it went much better. Over the winter I’m going to try and get over to Adams Farm more often. If you’re ever in southern Vermont, you should make every effort to stop by this fabulous place.

Of course, I couldn’t walk out of there without buying some of this: 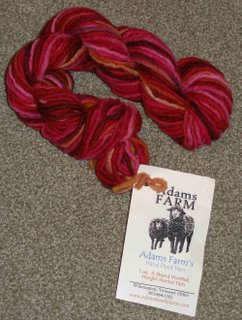 It’s from their own sheep, and it’s even softer than Morehouse Merino. I bought four of them. I think it’s going to be a scarf. (The colors look great with my down jacket.) I have no idea what kind of scarf, though. I'm open to suggestions on what to do with 4 ounces of this yarn. Anybody?

Next time… the second half of the yarn crawl!

Posted by Elizzabetty at 7:57 AM

a) Thanks again for the Malabrigo!

b) Yes, I cuddled it like a puppy, but I think that's only normal.

c) I should've pushed for a specific DATE when asking about your birthday. Why didn't you tell me? Happy belated!