OK, there's something else I've been holding out on you guys about...

You remember last month when I was whining about having to report for jury duty. Federal court in Brooklyn. Well... you see... it turns out that they were looking for jurors for this trial.

Can you say "holy crap!"? I had joked to my sister and mother that as long as it's not the Gotti retrial I'd be OK with it. Yeah, well, I was wrong--I didn't know anything about this one... until after the judge introduced us to the attorneys and defendants, and described the case to us, and we filled out the 50-page questionnaire. I had to start calling in on February 2nd to see if I had to go back in for additional questioning. I've been calling in every day since then and my number finally came up for this past Thursday.
(Oh, I forgot to tell you that this is going to an anonymous jury. Yup. I would only be known by my number. And this jury is going to be brought into and out of the courthouse by court officers every day--for their protection. And this trial is expected to last about 12 weeks... it just gets better and better, doesn't it?)

Believe it or not, I had some serious reservations about serving on this case--like, what if my identity became known? Anyway, I went before the judge (and lawyers and defendants), was questioned by the judge for about 10 minutes, and was excused from the trial. I don't want to go into specifics about why I might have been excused (which would only be conjecture on my part), but let's just say having a blog--any blog--doesn't hurt your chances of being excused...

OK, enough about that... aside from getting excused, the next best thing about Thursday was that while I was waiting, I was able to finish the leg on my Vesper sock! 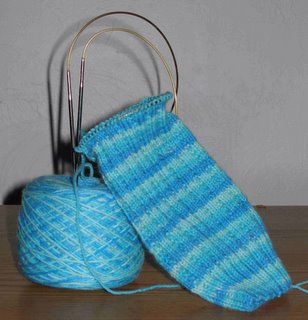 I could've started the heel flap, but my concentration level wasn't there so I thought better of it. I brought the watchcap as well, so I worked on that--mindless 2x2 ribbing.

Well, now that I'm a free woman, I headed up to Vermont this weekend to celebrate my freedom and Valentine's Day with my dear fiance 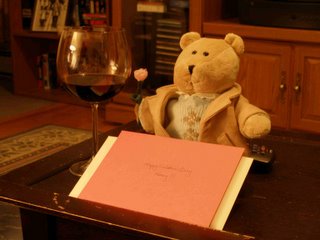 Oh... and apparently winter has come back to Vermont. Here's what the temperature is outside right now. 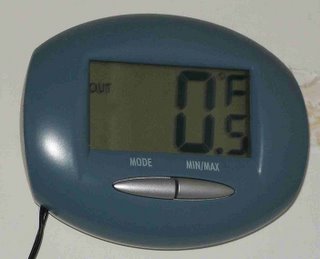 Pretty nerve-wracking. At least you got knitting done :o)

Yes, I can say "holy crap!" But you've heard that enough from me. Once again, thank goodness you didn't get selected.