OK, I've been teasing you about the last night of my Adult Ed crochet class. It's been over a week now, so here--finally--are the highlights of the final class.

"Susan," our instructor, brought in a bunch of free crochet patterns that she picked up at Michaels. She even picked up a couple of knitting patterns especially for me (which I thought was very nice of her). She also gave us her home number in case we had any questions, also very nice of her.

One of the other women in the class, who's been cranking out really nice afghans like you wouldn't believe, asked Susan how to do a half double crochet stitch. Well, Susan had the same reaction she had when I asked her about the reverse single crochet stitch--"Half double crochet stitch?!?!?!?!? Uh... uh...," and with that she scurried away to help someone else. That's OK. At this point, everyone in the class seems comfortable enough with the basics that I'm sure they could figure it out with a decent basic book.

The promised Christmas ornaments lesson didn't happen (yesssss!!!). Instead, everyone worked on their granny squares, scarves, and afghans while we all chatted. It was kinda nice. I gave up on the granny square (for now) and decided to try this. 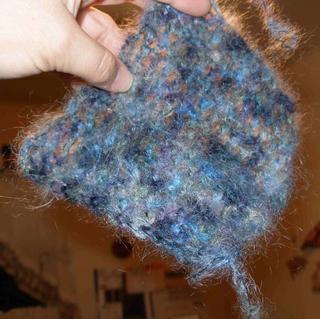 That's the beginnings of a scarf that I'm making with a ball of Artful Yarns Portrait. I had started a knit scarf with if two years ago (pattern on the tag), but wasn't happy with it. So, I decided to see how it would look with some simple crochet stitches. I think it's much happier in crochet. (Really--I think the yarn is happier. And yes, sometimes the yarn tells me what is wants to be. Come on, I'm not the only one who feels this way...) Here's what alternating single crochet and double crochet rows looks like--in x-ray vision: 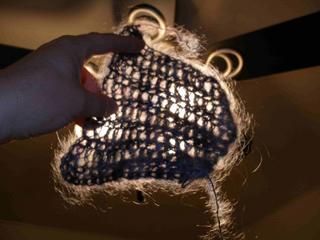 And, of course, we had to have an interesting moment during the last class. The woman who's been making the crocheted bathing suit--let's call her "Kitty"--made some interesting comments. (Just to refresh your memory, this was the woman with the black and yellow bathing suit who does cat rescue and has 17 cats.) First of all, the other thing she was working on--the pink and purple crochet thingy--it's another bathing suit. She's going to make a whole bunch of them over the winter and sell them next year. OK, that's fine.

Well.. apparently, she has some issues with insurance companies and the Department of Motor Vehicles. Seems she had some kind of disagreement with her auto insurance company and somebody (either her or them) decided to drop her insurance. Then, the DMV irritated her so she dropped the whole register-your-car thing. (I'm guessing that there's no reason for a car inspection, then.) We all just kind of sat there in stunned silence. I'm mean, "Susan's" husband is a cop. Me thinks it's not really smart to admit all this--and be proud of it, to boot. Well, the awkward silence was finally broken when one of the women said, "...and, where exactly do you live???" We all cracked up.

So, there you have it. While I didn't finish that baby sweater, I did come out of the class with a good grip on the basics of crochet and feel confident that I'll be able to figure it out myself.

Of course, I may be a little nervous driving around the neighborhood now....

Haha! Seems like we are almost opposites of each other! I am a pretty good crocheter, who has taken 1 or 2 knitting classes and "sort of" knows how to knit. Emphasis on sort of. I'm not very good at the knitting thing, though I need to dive in and knit a scarf or a potholder or something, just to get the experience.

That woman with the insurance issues - seems to me like SHE is the one with the issues! How funny! I would be so embarrassed/terrified to tell anyone if my insurance company had dropped me!