I've been busy lately. On the office front, the first round of layoffs took place on the 26th. We're now working on the-book-that-shall-remain-nameless. (After a month of disinterest by the authors, we're expected to fast track 3,000 pages of manuscript in about 3 week. Unfortunately, we'll bust our asses and manage to do this, and further raise their unrealistic expectations. But that's a rant for another time...) On the Vermont/Jim front, things have been a little tense lately. We've got an issue, which I'll discuss below.

But first, I've got a little knitting content for you. Today I finished not one, but two items! The Village Knitter hosted a charity knit event for Care to Knit today, knitting chemo caps for our local hospital. My knitting group has been working on chemo caps for the last few weeks, but today I figured I'd start one for this charity. Not only did I start it, but in about an hour and a half I finished it!

People--this is such a first for me! Record time knitting! No potty breaks either!!! 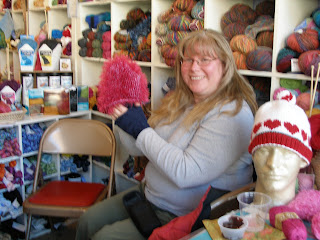 Thank you, Joy, for documenting this historic event!

These Fun Fur/Microspun muppet caps just make me giggle. This one was pink fur and purple microspun. Very Valentiney and pretty! I hope this makes some little girl very happy!

My other finished item--the third pair of Fetchings for my sister. They're exactly the same as the other two pairs (navy blue RYC Cashsoft Aran). Even though I really love this pattern, I think I'm going to take a break from it for a while. I don't have any pictures of this pair, but if you go to Carole's blog, you can see us modeling our Fetchings last weekend. (I've got the pink sleeves.)

OK, now on to the non-knitting portion of today's post... 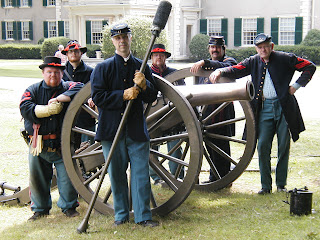 Y'all know that I do Civil War reenacting as part of the 2nd Battery Vermont Light Artillery. My unit has been the proud caretaker of "Evelyn," an original 12 pound Napoleon cannon, for the past 30 years. As a unit, we've taken our responsibility for the care of Evelyn very seriously and have kept her in excellent condition.

Well, we are in danger of losing the use of this magnificent gun. The details of this situation can be found at our unit's website, so I won't repeat all of this here. (Go ahead and take a look at the site. I'll wait...) But what I will say is this: the president of the board for the state organization that is now laying claim to the gun has engaged in what I would consider questionable tactics. He has basically contacted Jim (who is our unit's commander) on several occasions by phone and e-mail (with the occasionally follow up snail mail of e-mail attachments) and demanded that we immediately turn over the gun to him. Nothing official from the state of Vermont, who we have always believed to be the gun's owner. Just repeated demands to give them the gun now. He has never produced an official document from the state authorizing the transfer to their museum. The closest thing he's sent us is a document outlining the history of the gun's ownership that was addressed "to whom is may concern."

Now, we've always held that the state of Vermont is the owner of the gun, and that it was always possible that the state might order us to turn over the gun to them, but seriously, shouldn't that order go through some official channels and be accompanied by a state-issued order of some kind? And since when should valuable artifacts get turned over based on phone calls and e-mails demanding that they be handed over because someone says so??? (Can you say "bullying"? That's what I would call it.) So, that's what has been going on for the past month or so.

Fortunately, the gun is currently in winter storage at the Watervliet Arsenal (a secure government military facility, as well as the best facility for performing maintenance on it). Jim has been spending a lot of time investigating the ownership issue and it's really been stressful on him as well as me and the rest of the unit. It's not so much the losing the gun but how the whole situation is being handled.

Many of our fellow reenactors have been supporting us with a letter writing campaign to Vermont's Governor Douglas. If any of you would like voice your opinion on this to him, the Governor's website has a comment page that you can use. 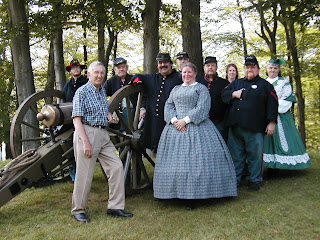 If you've stayed with me this far, thank you for listening. And as a token of my appreciation, some bonus knitting pictures! 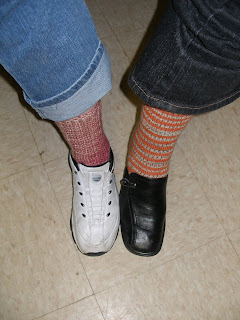 Here we have a picture of a sock meeting between bloggers! That's my Thuja sock on the left and Carole's lovely Opal sock on the right.

And look what's new in my Vermont fiber frolic room... 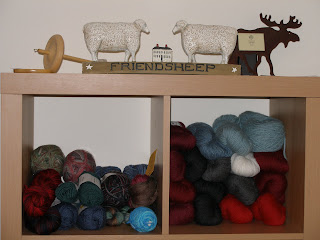 Details of the cubbie contents to come...

Posted by Elizzabetty at 9:43 PM

You know you have our support about Evelyn.

The-book-that-shall-remain-nameless can suck it (even though that's why I have my job).

The dude bullying you about Evelyn can suck it, too.

On the flip side, your chemo caps, Fetchings, socks, yarn cubby, and particularly the "friendsheep" figurine get my applause.