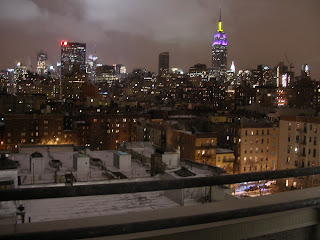 The snow's just begun here in New York and my workday if just about over--at 9:38 p.m.! (We're still working on the-book-that-shall-remain-nameless.) It's been a long day and with the weather predictions for tomorrow I'm not sure I'm going to be able to get in here or get home. (The LIRR is notorious for crapping out in this kind of weather.) We'll have to see what kind of precipitation we wind up with.

But in the meantime, wanna see how my Malabrigo hand warmers are coming along? 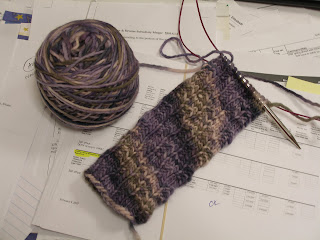 Quite splendidly, I think! I'm going to make them just a scootch longer, but that there puppy's just about done.

(Speaking of puppys... you see the colors of the Empire State Building? It's lit up tonight in honor of the Westminster Kennel Club dog show, which is over at the Garden.)

Oh--and a quick update on the cannon controversy. There was an article published in the Brattleboro Reformer about it, and... well... let's just say that many of the statments in it have enraged some members of the New England Civil War Artillery community. If there's one thing our unit--and our fellow reenators--take seriously, it's safe practices in the field. This article paints us as irresponsible. Nobody calls us irresponsible and gets away with it!!! Grrrrrrrrrr....

OK, time to run for the train now. Good night y'all!
Posted by Elizzabetty at 10:02 PM

That article is absurd! Does Jim have photos/documentation of the condition the cannon was in when you guys got it?

What a bunch of slanderous horse shit. Unbefrickenlievable.