It may not have been Rhinebeck...

My Elderhostel trip with Jim. From Philadelphia down to Virginia and Annapolis. It may not have been Rhinebeck, but there was yarn... 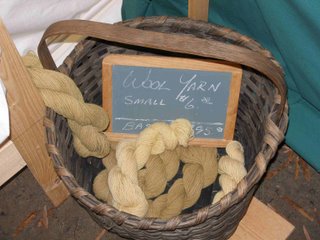 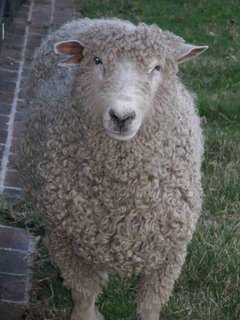 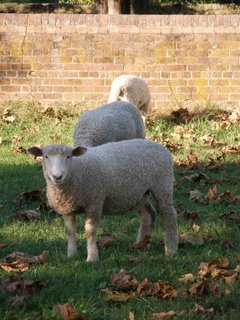 ...and yarn from the sheep! 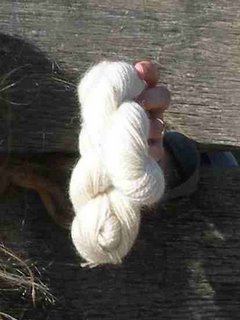 The yarn in the first picture was from a colonial sutler set up at the Yorktown Victory Center, part of the 225th anniversary of the Battle of Yorktown. I didn't buy yarn here, but I did buy a wooden thingy that you use to make cords (i-cord maker???).

The sheep? They're Leicester Longwool at Colonial Williamsburg. Jim and I drop off the Elderhostelers in the historic area in the afternoon, and then I dragged him around we went off in search of some sheep. After all, I gave up Rhinebeck to join him on this trip. Didn't I deserve to see some sheep?

As a side note, Jim dressed in colonial attire on our day in
Yorktown/Williamsburg. I didn't, and while we were walking through
Williamsburg I felt really weird. Lots of our reenactor friends who have
been there have dressed in period attire during their visit. I always
thought that was so weird. However, it felt weird to be dressed in modern
attire. Hmmmm... have they assimilated me like the Borg?

Anyway, after I found my sheep we went back along Duke of Gloucester Street and stopped in a couple more stores/gift shops. Well, in one of these shops they were selling yarn from their sheep! And after calling Elsie to ask her advice on what I could make out of a single skein of this stuff, I bought one! (And while talking to Elsie on my BlackBerry, Jim and the colonial shopkeeper took great pleasure in making fun of me "talking into a black box" and saying that maybe I should be "taken to the Public Hospital" (a.k.a. insane asylum). Yes, I gave him crap for it.)

All in all we had a good day wondering the streets of Williamsburg. And even after dragging Jim around looking for sheep, he was able to chuckle. 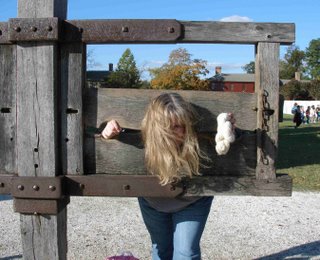 This is what he'd probably like to do to me if I come home with any more yarn.

I'm glad you guys had a good time. But you'd better come to Rhinebeck next year!

I love that first sheep photo - so cute! :o)