I had the best of intentions of blogging from Chicago last week (business trip). I planned a yarn crawl on Sunday and maybe a visit to The Fold on Tuesday. Schlepped my notebook on the plane, visited three yarn shops on Sunday--as planned. Took a whole bunch of pictures. Went to my meeting on Monday, then dinner Monday night. Just before the entrees came out I found out that my department was going to have another restructuring. There were going to be layoffs (not right away, but staggered over the next year). I still have a job. My staff still has their jobs. Most of the rest of the department is getting laid off. It all took me by surprise. I'm still a little stunned by it all, and sad--very, very sad--for those who will be leaving.

I've been working on my Chicago blog post for a week now, but I just can't seem to finish it. As much as I really don't want to talk about work in my blog, I think I needed to say all this before I could move on. So, I've got another two days in the office this week, Thanksgiving with my mother and younger sister, and then I'm off to Vermont for a few days to see Jim and work on the house. And a blog entry or two (or more). I'll have some yarn pictures for you. Really neat stuff I bought out in Chicago.

For now, I'll leave you with some sky pictures at 41,000 feet. The colors were so clear, so blue, with a fluffy white cloud carpet below us. 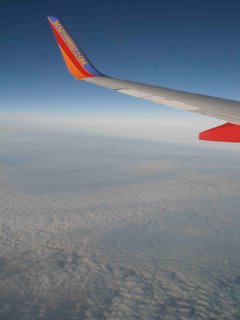 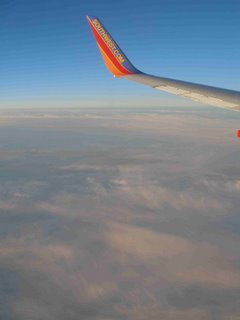 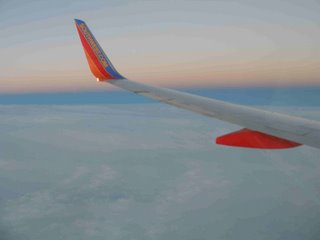 I'm sorry about the job situation. At least if you got laid off you could move to Vermont and be with Jim.

I'm sorry you have to deal with the layoff thing - however, I agree with Carole ;o)

i'm especially sorry to hear that things have taken such a turn at work, and especially glad that you and your staff have been spared. (though as others note, there is the lay off = move to VT aspect, and VT sounds pretty good to me...)